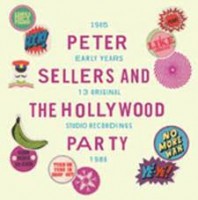 "The Early Years 1985-1988" is the opera omnia of the Peter Sellers, one of the most influential bands of the Italian underground. The enclosed CD contains both the songs on the vinyl and some rare and unreleased demo track and live version.In "The Early Years 1985-1988" you will find "Chaotic Shampoo & Strange Rock-N-Roll", Peter Sellers's first recording studio experience, released on the English label Glass Records for the legendary collection, '50,000 Glass Fans Can -t Be Wrong-, a compilation shared with heavyweight indie bands such as The Pastels, Jazz Butcher, Nikki Sudden, Mayo Thompson and Spacemen 3. The liner notes have been edited by the journalist Roberto Calabrò, also author of the volume "Eighties Colors/ Garage, beat and psychedelia in the -Italy of the eighties-. The cover artwork has been created by the illustrator Vitamina.