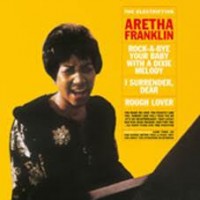 It-s a common misconception that the late legend of soul, Aretha Franklin, didn-t cut a good record until she got out from under her Columbia Records contract and began recording with the Muscle Shoals Rhythm Section *aka The Swampers( for Atlantic Records. While those Atlantic sides are some of the greatest deep Southern soul ever recorded, there-s a lot to love about her earlier recordings. Yes, there is much more of a pop R^B vibe to them with swinging arrangements and large horn and string sections but that unique and perfect voice is still there, here piano playing is gorgeous, and there are some serious Northern Soul burners in the bunch. The Electrifying Aretha Franklin originally released in 1962 features some of her greatest early tracks, including the Northern Soul classic @Rough Lover@. A great piece of early -60s R^B from the undisputed Queen.

Franklin, Aretha
The Tender, The Moving, The Swinging...

Franklin, Aretha
The Gospel Sound Of...

Franklin, Aretha
Laughing On The Outside