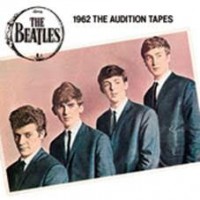 Recorded on the 1st of January, 1962, in London, this is maybe the most famous audition tape in popular music history, an audition that altered the course of 20th century rock music. The Beatles, in their Lennon & McCartney & Harrison & Best incarnation, recorded these 12 rollicking covers for the Decca label in just under an hour. They were eventually rejected by the label and went on to sign with EMI subsidiary, Parlophone, and the rest, as they say, is history. Had they signed with the label in the winter of 1962, would they have become the band that changed the world? Who knows... but what is clear is that this was a great band, even in infancy, and these great rock and roll covers not only show their potential, they're a damn fun listen in their own right.Track list 1 Three Cool Cats 2 Crying, Waiting, Hoping 3 Besame Mucho 4 Searchin 5 The Sheik Of Araby 6 Money (That's What I Want) 7 To Know Him Is To Love Him 8 Take Good Care Of My Baby 9 Memphis, Tennessee 10 Sure To Fall (In Love With You) 11'Till There Was You 12 September In The Rain