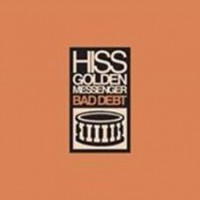 Although I'm the biggest fan of MC Taylor's previous band The Court and Spark, his latest (more successful) outfit Hiss Golden Messenger have never quite hit as hard. They have, however, enjoyed the patronage of Sir David of Bowie amongst other critical acclaim so maybe I'm just missing out. His music has always had a back porch rustic feel but on recent albums has been billowed out by a slightly bigger production budget. This album however was recorded on a cassette player in his pine /entwined North Carolina home and is further evidence that a simple cassette player can do the things a big studio can only dream of.Its an intimate, grainy portrait where you feel like you are in the kitchen with him, draining a pint of microbrew while this talented songsmith runs through his latest home prepared batch of acoustic gems. The rough and ready recording adds a magic to the songs, his voice has never sounded better, it has a grainy texture and a soulful delivery that has a sprituality to it which is hard to to describe. It can get watered down slightly on his more elaborate records but here it is in its purest unsullied form, the songs are terrific, memorable bursts of melodious countrified strumming music on religion, existential crises and spirituality.Re/issued from its original version lost in the big London fire with added bonus tracks, this will appeal to fans of the starker Songs Ohia material, Bill Fox's 4 track blues and Bruce Springsteen's ebraska'. Starkly beautiful.