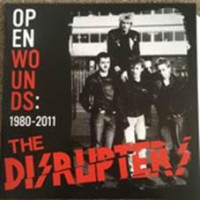 Compiled by found member and vocalist Steve Hansell, this is the first compilation to span the entire Disrupters career. A one/off pressing on blue vinyl of 500 copies it includes a full size insert with photos and a detailed band history. The Disrupters formed in Norwich in 1980. An early demo sent to Crass saw them appearing on the first 'Bullshit Detector' album. Summer 1981 the band went into the studio and recorded the 'Young Offender' 7" which would be released on their own Radical Change label, establishing the band as one of the premier anarcho-punk bands. Another single -Shelters For The Rich- followed as did the classic album 'Unrehearsed Wrongs'.

Dag Nasty
Four On The Floor