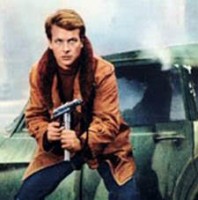 Perfect "noir jazz style" soundtrack composed by the Maestro Ennio Morricone for the 1966 Italian crime thriller "Svegliati e Uccidi" *aka "Too Soon To Die"( directed by the well/known Carlo Lizzani *who first gained notoriety working on such Italian neorealist classics as Rossellini's "Germany Year Zero" and De Santis's "Bitter Rice"( and starring Robert Hoffman and Gian Maria Volonté. Dark and powerful, this is one of the best of Morricone's crime thriller scores of the period, which should appeal to fans of celebrated scores like Città Violenta and Revolver. FIRST TIME ON VINYL THE COMPLETE VERSION WITH 9 BONUS TRACKS. LIMITED EDITION OF 500