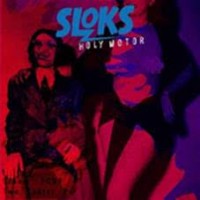 SLOKS !!!! is a Super Raw Power Ultra Primitive Dirty Suicide Destructive Garage Punk No/Wave Trashed out Rock-n-Roll combo, the Band formed in Turin Italy 2015."I saw them on a Local Alternative Festival in Italy for the first time, it was so Destructive and Suicidal Dangerous and amazing eye catching the same time, the Female Singer Ivy Claudy almost killed herself in her act strangling herself with the microphone cable and screamed as loud that she spit blood on the same time Buddy Fuzz wanked constantly his guitar overdosing totally distorting and endless feedback they were so Negative and creative the same time .. i t was defiantly way too much for the audience and most of them left immediately except Us ... and they had to open the festival anyways hahaha .... i was blown away of the energy the band has and the complex personalities of the band members, so i send them to Lo Spider in Toulouse to his Swampland Studios (Destination Lonely, the Monsters, Lame, Roy and the Devils Motorcycle, the Lullies) to record a whole album for Voodoo Rhythm records, and here we go .. this is one Nasty Piece of TRASH !!!!! Enjoy and book them if you wanna experience a Live Madness Massacre!!!!!" . BEAT/MAN

Childish, Billy & Ctmf
You're The One I Idolise