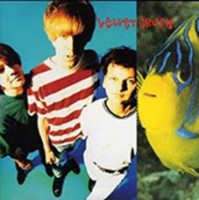 Velvet Crush
In The Presence Of Greatness

Reissue of the debut Velvet Crush LP from 1991, originally released on Creation Records. Record&mixed on 8 tracks by Matthew Sweet in his basement in Princeton, New Jersey 1990/91. Repackaged in a new sleeve with photographs from the original session by Michael Lavine. Velvet Crush have re/formed and will be touring the world from late Autumm 2018 and onwards.