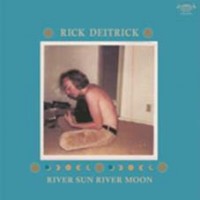 Gentle Wilderness was released as a private press LP in 1978. River Sun River Moon consists of previously unreleased recordings from the same time period. Ohio/born Rick Deitrick took up the guitar at 16 and decided to approach his playing as if he was the only guy on an island and the instrument had just washed ashore one day. Ac/cording to Rick, "I completely divorced my playing from any formal music knowledge, but it was very important to me to use origi/nal tuning. During those years, the sixties&seventies, there was a lot of acoustic guitar playing, often using open tuning as a base. I wanted to create whole tones without de/tuning and keep access to the complex sounds stock tuning provided." Rick pressed 500 copies of his tranquil solo guitar record, Gentle Wilderness, in 1978 on Niodrara Records, and sold many at performances and directly to music shops who would pay for them. He gave copies to various libraries and left a few albums in the middle of the wilderness, next to trails, "so people would find them." Rick sought inspiration in nature and in particular the various rivers scattered around the Western United States, often composing songs seated beside them -and even occasionally perched on boulders in them. He never played the songs the same way twice and did two passes on each composition in studio. Rick would sometimes literally come straight out of the mountains and rush to the studio to record the ideas he'd gathered.

Brown, Bob
The Wall I Built Myself