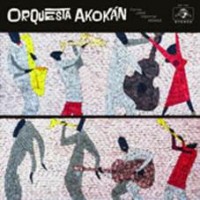 Direct from Cuba! Daptone Records is proud to introduce Orquesta Akoka'n, a big band collective of Havana-s top musicians both young and old, joining forces with some of the most creative and spirited talents of New York-s Latin music scene. Born out of a shared vision by singer Jose "Pepito" Go'mez, producer Jacob Plasse, and arranger Michael Eckroth, the group reinvigorates the sound of the golden era of Cuban mambo with a bold new energy. Featuring all/original music cut live to tape over a three day session at Havana-s hallowed state/run Estudios Areito / one of the longest operating studios in the world and where seminal Cuban records have been made since the early -40s, and more contemporarily with the 1997 release of the Buena Vista Social Club album / the group-s self titled debut feels like a heartfelt gift from the band to listener. Which is no coincidence being that Akoka'n is a Yoruba word used in Cuba meaning "from the heart", and indeed every song presented here is just that. This is a fascinating next step for Daptone, which released the final album by Sharon Jones and the Dap/ Kings and mourned the loss of Charles Bradley in 2017. Orquesta Akokan finds the label branching outside its own studios to release its first Spanish language album.