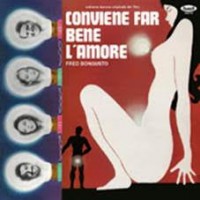 In the future, the world-s oil supply has finally been exhausted, causing a massive energy crisis. In a search for alternative sources of energy, a scientist invents a machine that can harness the energy expended during sexual intercourse and transfer it into electrical power. Conviene Far Bene L'Amore is a 1975 film written and directed by Pasquale Festa Campanile, a film adaptation of his novel of the same name. It is an erotic comedy with science/fiction elements that is debilitating the theories of Wilhelm Reich *the author of The Function of the Orgasm( in which satire and fantapolitic are mixed. The original LP with the music of Fred Bongusto, arranged and directed masterfully by Josè Mascolo, is now a cult object for the lovers of Italian melodic soundtracks with bossa nova and jazz and for the samples used by many rappers. Bongusto often combines the synth for the melody with the orchestral ground< an unmistakable and very personal solution also used the year before for the Malizia soundtrack which was a great success.

Various
Every Bastard A King