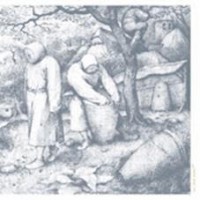 WHITE2 was originally released in 2003 by Southern Lord. SUNN O))) co/founders Stephen O-Malley and Greg Anderson originally conceived the WHITE albums to be -acoustic- but the sessions at Fontanelle-s Magnetic Park studios in Portland Oregon quickly took a far different route toward the psychedelic and the electronic&synthetic, with trance and drone experiments.The WHITE2 album was notably the first collaboration with the Hungarin singer and legend Attila Csihar, which has since begat a long and fruitful creative story of the O))) ethos. With the WHITE albums SUNN O))) took a bold step toward the experimental and highly collaborative path the concept of the group has travelled since. Together with Attila WHITE2 featured the extraordinary talents of the special guests JOE PRESTON, REX RITTER ^ DAWN SMITHSON.Along with WHITE1 the album brought SUNNO))) forth from the shadows of the earth unto the broader cosmic spheres, arriving at a truly transcendent note with the pairing of the -DECAY- tracks featuring Attila. And the sky cracked open.