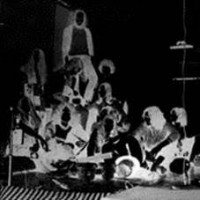 Coming out of the boiling Munich scene of the sixties that also gave us the original Amon Düül *Thom Argauer had played in a dixieland band with Chris Karrer in the late 60s, actually(, Siloah are one of the best kept secrets of the krautrock production. Siloah had a hard core including Thom Argauer, Manuela von Perfall, Heinrich -Tiny- Stricker and Wolfgang Görner, plus a host of guests coming and going, everybody was free to join and play at any time, guest members often joining from the Baumstassen commune around which the band was living before they eventually moved to an abandoned farm on the outskirts of town.Their first LP is a trippy acid psychmasterpiece recorded in 1970 and privately issued on German Blues and Undergrund. It showed a strong influence from US West Coast psychedelic music and has a lovely acoustic approach. It-s sound is free, full of improvisation and with a charming amateurish feel all through it. It will appeal to lovers of free spirits like Amon Düül themselves, Kalacakra or even Música Dispersa.The Wah Wah reissue is made in cooperation with Thom Argauer family, it has been cut from the original master tapes, has original artwork *improved by printing it over a mirror finish silver cardboard(, has two bonus track not on the original LP added, features an insert with photos and liner notes and comes in a strictly limited edition of 500 copies only.