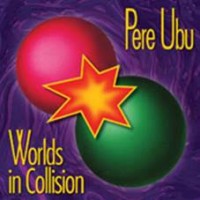 "Solid as the band can be, it-s also likely to dissolve songs from the bottom up. For all Pere Ubu-s uncertainty, the band isn-t arbitrary< its music has the off/the/wall unity of a Marx Brothers routine," said Jon Pareles of The New York Times. In 1991, "Worlds In Collision" became "the most atmospheric, carefully sculpted recording in the band-s 13/album catalog." (Tom Moon, Spin).

East Village
Cubans In The Bluefields