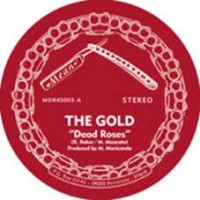 The First Mystery: "The Gold" - Where does this name come from? Maybe it's because these guys are like very valuable treasure, still hidden underground, and nobody has found them yet. It may also be that, as the great Little Richard once said, there are artists who have the strange ability to turn gold into shit - just remember what Pat Boone did with his songs - but on the contrary there are also those who transform everything that falls in into their hands into a brand-new shiny gold ingot. This, for example, is the amazing case of The Gold. A case of joyful alchemy that pays homage to The New York Dolls, Johnny Thunders and the Heartbreakers, The Rolling Stones or The Stooges - neither more or less - but simply, embracing the spontaneous energy of rock and roll.The Second Mystery: How is this possible? The answer is in the sum of the talents of Kurt Baker (guitar, voice) and Marky Las Vegas (bass, voice) -founders of the group-, Oky Von Stoky (drums) and Mark O'Flaherty (guitar), guys in permanent combustion, fueled by a long-term passion, not suitable for upstarts or amateurs. And it turns out that these four golden men write songs like daggers. On top of that, their live shows are abrasive and fresh at the same time, their guitars scream, and their rhythm, in its right measure, is always one step away from the brink of the abyss.The Third Mystery: And how is this possible NOW? Perhaps it's a matter of poetic justice, maybe. In these times of pre-cooked, tired and stale fashions offering few surprises, their rawness is appreciated and more importantly needed. There is no other group like The Gold. Hidden, about to be found. Mystery solved.TRACKLISTA. Dead RosesB. Too Far Gone