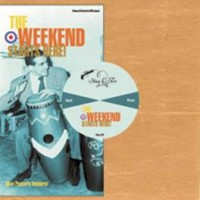 Back in stock! The 2nd volume of the The Weekend Starts Here series deals exclusively with the Popcorn genre.Popcorn is a style of music and dancing first established in Belgium in the 1970s and 1980s. The style includes a wide variety of mostly American and British recordings of R^B and pop music made between the late 1950s and mid 1960s, often relatively obscure, and characterised by a slow or medium, rather than fast, tempo. The Popcorn music scene first developed from dances held at the Groove discotheque in Ostend, where mid/tempo soul and ska music played by DJ Freddy Cousaert became popular in the late 1960s. In September 1969, a café, De Oude Hoeve, opened in a converted farm barn at Vrasene near Antwerp, and began holding dance competitions on Sunday afternoons. Soon up to 3,000 people began attending each week, dancing in a @slow swing@ style. De Oude Hoeve was later renamed Popcorn and the special genre has it's name. Later on the Dj's messed up a perfectly fine recipe by adding all kinds of pop tunes as long as the tempo was right. This 10" however features 12 pure Popcorn groovers from the "golden era".Tracklisting>A/Side1. Ann Cole / Each Day2. Jack Costanzo / Cat Walk3. Milton Trenier / Gonna Catch Me A Rat4. Ray Smith / Makes Me Feel Good5. Nappy Brown / Coal Miner6. Danny Rivers / HawkB/Side1. Johnny Copeland / Just One More Time2. Al Perkins ^ Betty Bibbs / Homework3. Eugene Jefferson / Too Young4. Chuck Bowers / You And I Are In The Same Mood5. Clarence Daniels / Hard Working Girl6. Lew Conetta / You Got Me Crazy Baby