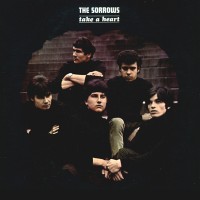 The Sorrows were a rock band formed in 1963 in Coventry, Warwickshire, United Kingdom by Pip Whitcher, and were part of the British beat boom of the 60s. They were a fixture in the English mod scene. The Sorrows released their first album, -Take A Heart-, in 1965 on Piccadilly Records. They played a hard, aggressive version of contemporary R^B< later this style of music was termed freakbeat.