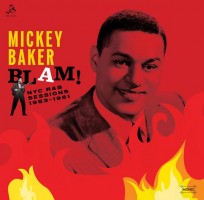 Most of the tracks reissued here for the first time.Remastered sound from original 45's.Liner notes and sessionography by expert Fred Rothwell.The contribution of Mickey Baker to 1950s music puts him next to titans like Bo Diddley and Chuck Berry. He is undoubtedly the king of 50s R&B guitar as well as an inventor of the sound called rock and roll. The difference between these two and Baker is that his career has been unfairly undervalued, if not almost unknown. And his recorded output is FIVE times more than Chuck and Bo combined.The most in-demand studio musician/session guitarist par excellence during the golden years of the R&B laid the foundation for rock and roll. This tireless hard working musician spent half his life in the studio and the other half on tour and left his mark on hundreds, thousands of recordings, among which are hits from artists like Big Joe Turner, Ruth Brown or the Coasters. His incendiary riffs and solos were always aggressive, twisted but elegant sounding. Baker possessed creativity ahead of his time with excellent taste, and completely transformed the concept and role of the electric guitar into rock and roll forever. But don't panic. This is far from being an album for guitarists or academics. It is a selection of rare recordings that showcase him backing various singers and a few instrumentals easily moving through styles of R&B, blues, rock, gospel and folk done for different labels between 1953 and 1961. We are happy to present this diverse compilation with stunning sound quality and much of the material never before reissued. And we hope you enjoy the experience of discovering or remembering the immeasurable Mickey Baker, the king of and most recorded guitarist in 1950s rhythm and blues. TRACKLIST SIDE AA1. Blam - Big John Greer And His ComboA2. Don't Leave Poor Me - Big MaybelleA3. Anna MaeBrownie - Mcghee SextetA4. The Storm Is Passing Over - Marie KnightA5. Honky Tonk In Silk -Doc BagbyA6. I'm Doing All This Time (And You Put Me Down) - Stick McgheeA7. Big Boat Up The River - Brother John SellersSIDE BB1. Give Me Love - The Cyclones Featuring Eddie JonesB2. St. Louis Blues - Mickey And KittyB3. Night Life - Jesse StoneB4. A Long Time - Nappy BrownB5. Took My Feet Out Of The Miry Clay - Brother John SellersB6. That's A Pretty Good Love - Big MaybelleB7. Shake It Up - Mickey And Sylvia