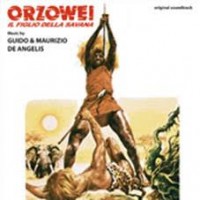 Digitmovies releases for the very first time on CD and LP the complete edition in full stereo of the OST for the Italian cult TV series @Orzowei@ which was composed by the prolific brothers Guido ^ Maurizio De Angelis. Based on the novel "Orzowei" written by Alberto Manzi and issued in 1955, the story was adapted into 13 episodes of an international TV hit series wich was produced in 1976 by Italian and German companies. It was directed by the French filmaker Yves Allégret and starred Peter Marshall as Isa & Orzowei, the British star Stanley Baker, Doris Kunstmann, Vincenzo Crocitti, and Bonne Lubega. This TV program was broadcasted in Italy in early 1977 and presented again with version especially re/edited for cinema theaters called @Orzowei / il figlio della savana" *"Orzowei / Son of the Savannah"(.