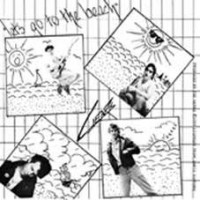 Gears, The
Let's Go To The Beach

Facsimile reissue of the debut 7" by legendary Los Angeles punk rockers The Gears, originally released in 1979. While The Gears embraced the fast and loud part of punk, they also added 50s rock & roll, surf music and 60s garage into the mix, which made their sound a killer blend of punk speed and fury tempered with greaser cool and swagger.Their LP from 1980, "Rockin' At Ground Zero", will be reissued on Munster later this year.TRACKLISTA. LET'S GO TO THE BEACHB1. HARD ROCKB2. DON'T BE AFRAID TO POGO

Gears, The
Let's Go To The Beach (color)