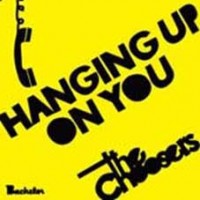 Choosers
Hanging Up On You

They are from Japan, they love Powerpop and the know how to sing & write melodies!!! These three guys are living on the northernmost main island Hokkaido, right in Sapporo City, and they did one firecracker of a single back in 2010 on the Japanese label POP'N'ROLL with two songs, "Christine" and "I Can't Stop", those 500 copies sold out in a jiffy. We immediately sent out our A^R guys to Japan to persuade them to do a single on Bachelor! And here it is! A classic single with two songs, an uptempo kinda love song called "Hanging Up On You" and a tearjerker of a flipside called "In my Dream"! Think of classic power pop bands like RASPBERRIES, 20&20 and NERVES mixed with the latest Japanese hitmakers like RAYDIOS, TREEBERRYS and GIMMIES! Yes I know, that territory is being explored much these days, but THE CHOOSERS really take it to a next level. Stats> 500 copies housed in a thick glued cardboard sleeve.