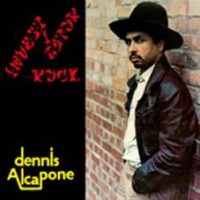 Dennis Alcapone was one of the first sound system deejays to rise to island/wide prominence, following the incredible success of U Roy's fluid toasting style, which took Jamaica by storm during the late 1960s. Alcapone, who was born Dennis Smith in the country town of Culloden in Westmoreland, southwestern Jamaica, first made an impact on a sound system called El Paso, based in the rough/n/ready west Kingston district of Waltham Park. Initial recordings for Keith Hudson were strictly underground, but an album for Studio One and popular work for Duke Reid significantly boosted his profile. Dennis Alcapone worked closely with hitmaking producer Bunny triker' Lee from the early 1970s, establishing a friendship that has lasted to the present day< Investigator Rock, which dates from 1977, sees the toaster riding Striker's rockers/styled hits, voiced by the likes of Cornell Campbell, John Holt, and Johnny Clarke.

Upsttemians
Down But Not Out (2x7)