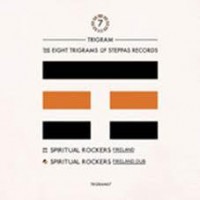 The penultimate release in the Eight Trigram series. This edition coming from Brazilian producer Spiritual Rockers, and played up until now as an exclusive and much sought/after dubplate. Super limited edition press housed in the reverse/board Trigram house bag. Raw, unadulterated tribal bass music with a deep roots foundation. This is the sound of Trigram.