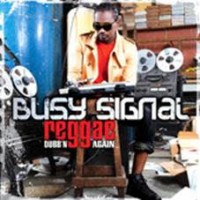 The special vinyl edition has been repressed and is ready for re/release! Here are the best tracks taken from Busy Signal-s most successful album, which was released as CD only full length album entitled @Reggae Music Again@ in 2012. This is a showcase style album / each track as extended mix with vocal ^ dub parts. Recorded at Tuff Gong, Penthouse and Kirkledove studios and mixed at Birchill, Juke Box and Tuff Sound studios. @Reggae Music Dubbing Again@ is a great father and son affair / produced by Shane Brown, one of the best producers of contemporary music in Jamaica and mixed by the legend and veteran engineer Errol Brown, who was already at the controls wayback at Treasure Isle studio and still is one of the most requested live engineers these days!

Busy Signal
Got To Tell You/stay So

Busy Signal
Parts Of The Puzzle