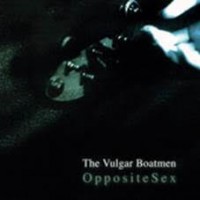 first time on vinyl!!!!In the early 1990-s, the Vulgar Boatmen-s first two albums, You and Your Sister and Please Panic, garnered accolades from virtually every major music publication in the country, despitebeing barely available on the tiny Record Collect and Safehouse labels. The group-s unique working arrangement (two distinct lineups, located 800 miles apart, fronted separately bysongwriters Robert Ray and Dale Lawrence) received a lot of attention - but so did their style, a melodic hypno/R^B, compared to everyone from Buddy Holly and the Everly Brothers to the Feelies and the Velvet Underground.The band toured extensively in the US and Europe. Their songs were heard on both college and commercial radio - especially "Drive Somewhere", a surprise hit on Chicago-s WXRT. Inthe 1992 Option Magazine Readers Poll, Please Panic placed fifth in the Best New Album category. In 1995, critic Bill Wyman called You and Your Sister the best record of the last ten years. The following year, his colleague at Salon.com Charles Taylor named Please Panic his all/time favorite album. In 1995, the Boatmen made their major label debut with Opposite Sex, released in Europe on Blanco y Negro&EastWest. It too received glowing reviews from the British press, but label politics at Elektra kept the album from ever getting a stateside release. In 2003, No Nostalgia issued Wide Awake, a 21/track anthology chronicling the band-s career.The vinyl re/issues are limited to 500 copies each and come in the original artwork. The albums have been partly re/mixed and re/mastered. Liner notes and accompanying photographs willbe different for each release. Liner notes for You and Your Sister by Bill Wyman. Liner notes for Please Panic by Charles Taylor. Liner notes for Opposite Sex by Ira Robbins.

Vulgar Boatmen
You And Your Sister