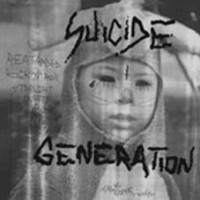 Channelling sounds of The Reatards, Gun Club, Pussy Galore, and GG Allin, London-s Suicide Generation have exploded all over the city as one of the trashiest and most un/predictable bands around. Leading this suicide pact is the super/charged sickness of lead singer Sebastian Melmoth, who rips out his vocal chords whilst choking out visceral rants , along with the steady balance of Vince Sooicide-s snarl/ing rhythm guitar, that forms the glue around a revolving door of delinquent players. Combining the collective sloppy seconds from various failed band reject replacement parts, Suicide Generation basks in its own dirt and scuzz, their sound is a fervid rush of trashy goodness . A spokesperson for the label said> @They-re not a joke< they really do mean serious business even though they haven-t a clue. Yes, they may appear like a bastardised freight train going off the rails, but you don-t ever want to play a game of chicken with them.@>