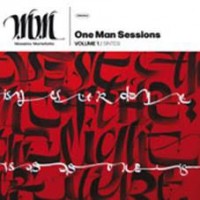 We came to know Massimo Martellotta via his band, CALIBRO 35, for which he wrote some of their most famous songs, some recently sampled by Jay/Z, Damon Albarn and Dr. Dre, and with which he is celebrating in the best way the tenth anniversary since its birth. Now the composer and poly/instrumentalist Massimo Martellotta announces the release in 5 volumes of his personal project, realized in autonomy and solitude, playing all the instruments present in his studio-laboratory in Milan. One Man Sessions will be published periodically on vinyl by Cinedelic Records, and the first of five volumes is titled SINTESI. This first chapter was created and produced, composed and recorded using only analogue and digital synthesizers, exploring the tonal possibilities and sound manipulation, obtaining a result that on one side pays sacred monsters like Wendy Carlos or Brian Eno, on the other hand is linked to a current trends like the Stranger Things soundtracks or the latest productions by Nicholas Jaar.Massimo-s solo work was then refined by Tommaso Colliva-s mastering and completed by the highly elegant graphic design conceived and created by Luca Barcellona. SHAWN LEE listened to it in advance and said> "Massimo Martellotta from Milan based band Calibro 35, is a man on a mission. The composer and multi instrumentalist makes his solo debut with a 5 volume series of brand new music. Functioning as a virtual one man orchestra, Massimo turns his deft hands to atmospheric cinematic groove ^ sound. Prepared Piano, Analog Synths, strings, Organ, Vibraphone all get the OST&Library treatment that is both unique ^ distinctively Italian. This series of recordings, showcase a musician recording in the moment and painting musical sonic pictures to movies yet to be filmed. Both Vintage and modern. Analog and Digital. Massimo Martellotta is following in the tradition of the great golden age of Italian film composers and I for one will continue to pay close attenzione!"