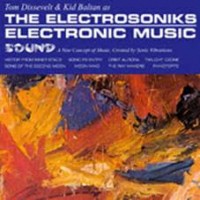 Tom Dissevelt and Dick Raaymakers (aka Kid Baltan) were both Dutch composers and electronic music pioneers. Both musicians began their studies at Royal Conservatory of The Hague on trombone and piano respectively, and later discovered the music of Karlheinz Stockhausen and Anton Webern. In the mid/-50s Raaymakers began working at the Philips NatLab (the Dutch research division of the Philips company). Dissevelt was recruited by the NatLab soon after, and this is where they met, working on Philips stereo equipment and electronics, and eventually composing electronic music and musique concrète pieces together. Their first recordings in 1959 together, -The Fascinating World Of Electronic Music-, set the tone of experimental synthesizer space odysseys that would be perfected with their 1962 LP, -Electronic Music-, released as The Electrosoniks. Cited by David Bowie as one of his favorite albums of all/time, -Electronic Music- is a forward thinking collection of bubbling synths and space/age atmospherics that is well ahead of its time. Since Dissevelt and Kid Baltan were employed by a research lab to compose and record electronic music, one might assume that the music would be soulless and restrained, but the reality is quite the opposite this is joyous and haunting and soulful music created by two undercelebrated Dutch pioneers who are finally getting the credit they deserve. Essential pioneering electronic music brought back to life by Fantôme Phonographique. Limited edition of 500 handnumbered copies.