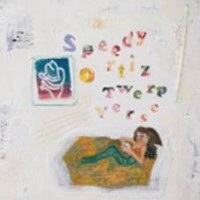 @Twerp Verse@ was tracked in Brooklyn DIY space Silent Barn, mixed by Omaha legend Mike Mogis *Bright Eyes, Rilo Kiley( and mastered by Grammy/nominated engineer Emily Lazar *Sia, Haim, Beck(. The record pulls from the most elastic pop moments in Squeeze-s Argybargy and the seesawing synth/rock of Deerhoof and the Rentals. With Dupuis on guitars, vocals, and synths, supporting guitarist Andy Molholt *of psych pop outfit Laser Background( now joins Speedy veterans Darl Ferm on bass and Mike Falcone on drums - and together they accelerate the band-s idiosyncrasy through the wilderness of Dupuis- heady reflections on sex, lies and audiotape. Dupuis, who both earned an MFA in poetry and taught at UMass Amherst, propels the band-s brain/teasing melodies with her serpentine wit. Inspired by the cutting observations of Eve Babitz, Aline Crumb-s biting memoirs, and the acute humor of AstroPoet Dorothea Lasky, Dupuis craftily navigates the danger zone that is building intimacy and political allyship in 2018. Now as public pushback against the old guards reaches a fever pitch - in the White House, Hollywood and beyond - the band fires shots in disillusioned Gen Y theme @Lucky 88,@ and casts a side/eye towards suitors/turned/monsters in the cold/blooded single @Villain.@ Closing track @You Hate The Title@ is a slinky traipse through the banality of this current moment in patriarchy - in which survivors are given the mic, but nitpicked over the timbre of their testimonies. @You hate the title, but you're digging the song,@ Dupuis sings wryly, @You like it in theory, but it's rubbing you wrong.@ Tuned smartly to the political opacity of the present, @Twerp Verse@ rings clear as a bell.

Girls Names
Arms Around A Vision