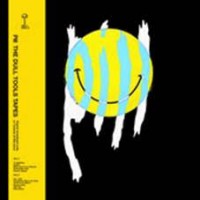 Out now for the first time on vinyl! The world first heard Pill on their self/titled cassette release on Dull Tools. And the world took note. Evan Minsker, writing for Pitchfork, says "they are loose with form, they pack in a lot of ideas, and they successfully deliver an emotionally complex narrative where joy is accompanied by an impossible/to/ignore undercurrent of danger. The band-s debut outing is enigmatic-a Dull Tools record through and through-but it-s also well crafted, full of stellar performances and unflinching lyrics." The band then signed to Mexican Summer, releasing their debut LP. Shortly after, prolific in a way that has become a hall/ mark of Dull Tools artists, they release another cassette, 2017's "Agressive Advertising". If one thought the self/titled cassette couldn't get more acerbic and confrontational, Agresstive Advertis/ ing proved them wrong. Now both releases are available on one LP. This LP is an important document of New York City's DIY scene and one of the best bands to emerge from it. Pill are an ever present force in NYC's scene. Playing small clubs like Baby's All Right, DIY spaces like Silent Barn and even the Museum of Modern Art. When the art and culture of New York is examined in, much in the way we examine culture from the past, you can bet that Pill will be a shining example of this moment in time. RIYL> The Slits, Suburban Lawns, DNA, Theoretical Girls, Lydia Lunch.