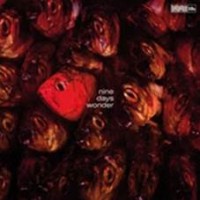 Back in stock! Originally released in 1971 the first and self/titled album by Nine Days Wonder was one of the very first recordings for the newly found label Bacillus of producer Peter Hauke. Nine Days Wonder with their international line/up consisting of bandfounder and singer Walter Seyffer, Rolf Henning (guitar, piano), Karl Mutschlechner (bass) from Austria, John Earle (vocals saxophone, flute, guitar) from Ireland and drummer Martin Roscoe from England, taking inspiration from Frank Zappa and the Mothers of Invention, King Crimson and Soft Machine. The album-s four titles were recorded by top recording engineer Dieter Dirks in his studio in Cologne. It turned out exceptional, both with regard to music and to artistic form> the music highly complex, with surprising arrangements, ranging from rough guitar riffs to the feel/good sound of acoustic guitar, unisonal baubles of guitar and saxophone, weird and harmonic songs, sudden changes of tempi / the album features such a multitude of facets that multiple hearings are required to appreciate them all, and they certainly make for entertaining listening. A musical fireworks display bubbling over with ideas that need not shun international comparison. From the artistic point of view the band had also come up with quite something.