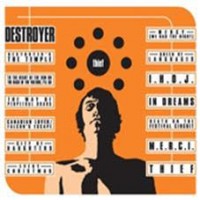 In the hallowed Destroyer discography, the early trinity of City Of Daughters & Thief & Streethawk> A Seduction holds an important place< for not only does it document Dan Bejar-s evolution from lo/fi bedroom tyro to bona fide master of the rock album, it also contains a massive percentage of superlative Destroyer @classics.@ 1998-s City of Daughters features some of the first steps out of the demo/tapey experimentation of earlier recordings, with songs like @Comments On The World As Will@ refining the sound of that stripped/down earlier work, and the seminal @No Cease Fires@ offering us the first taste of just what a full/band Destroyer might conjure. 2000-s Thief naturally went further down that road, and from the opening strums of @The Temple@ to the arty quirk of @Queen of Languages@ to the gentle, jagged comedown of the title track, it soon became clear that Dan Bejar was master of a singular songcraft// and one that was only just getting started. Because the following year brought us Streethawk> A Seduction. And every last inch // and I don-t mean this hyperbolically // EVERY. LAST. INCH. of Streethawk is a true classic.

Lovely Eggs
I Am Moron