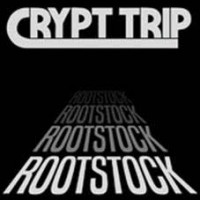 Crypt Trip is a group from Texas that plays hard rock music. Originally formed in Dallas in 2013, the first incarnation of the band had a heavy psychedelic sound that was reminiscent of a dark nineteen seventies underground.It wasn't long before guitarist&singer Ryan Lee and bassist Sam Bryant relocated to Central Texas where they met drummer Cameron Martin and began to solidify their sound. Taking influence from aged rock records, jazz methodology, and their cultural roots in the cosmic American South, their music presents you with a genuinely personal experience. Take a trip with @Rootstock@, the new album from the Texas natives Crypt Trip. You-ll find that the use of mind/altering substances is not necessary to feel the raw psychedelic power of the band-s sophomore effort. With its many peaks and valleys, @Rootstock@ will take you on a journey through musical dynamics and diverse musicianship. You will be confronted throughout with both high/energy rock and gentle moments of refined delicacy.No gimmicks. No strings attached. This is a simple and pure representation of three musicians in a collaborative effort to give you unfiltered Texas hard rock.