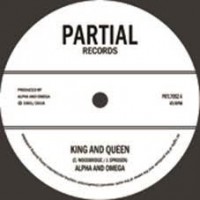 ][King and Queen is the 6th release from Alpha and Omega on Partial Records, following on from [Pure and Clean', [Rastafari', [Show Me a Purpose', [Jah Protection' and [Almighty Jah' which all sold fast.] This is a prime example of the heavyweight 1990s UK dub style, with this track dating from 1991, originally appearing on the LP of the same name *[King and Queen'(, ] On 7" for the first time, backed with a previously unreleased dub version.] A bonefide Jah Shaka Sound System classic from those times.] Tracklist> A. Alpha and Omega / King and Queen B. Alpha and Omega - King Alpha Queen Omega Dub