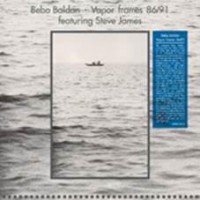 The alchemist Bebo Baldan, accompanied by Steve James on violin and sarod (as well as on instruments of various geographical extractions) mixes, in a personal way, sounds from a bevy of different cultures - from Mediterranean and Indian, to South American - with synths, samples, and loops. The result is a boundless music that carries us, riding soft waves and bobbing between Balearic ambient, jazz and electronic, on islands that have been quietly, yet carefully cultivated< peaceful, fascinating, and reflective - places where time appears to dissolve. Vapor frames 86&91 was originally released for Venetian Divergo - a non/profit label, which after the Baldan album, also released @The Wind Collector@ by Gigi Masin and Alessandro Monti a few months later.This reissue includes two added bonus tracks from the same sessions, both at the end of each side.The result is a stunning auditory atmosphere that relaxes the spirit in the same vein as a reiki treatment.