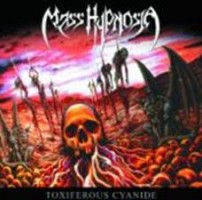 It-s been a while since the last full length album from MASS HYPNOSIA saw the light of day. About six long years passed by till the horde-s second effort finally hit the streets and the trio unleashes some new fresh-n-bloody chunks for the Metal fanatics around the globe *apart from several split tape releases and compilation stuff in the past(. With a new label under their belt these Filipino headbangers are now back with a vengeance and come up with a massive and lethal dose of relentless old school Death & Thrash Metal. Unlike most of their countrymates the outfit from San Mateo pleases our ears with a natural sounding and powerful production which undeniable compliments their songs and generates a lot of energy. The trio knows how to forge some aggressive tunes with nice breaks, murderous mid paced sections and of course a lot of fast, skull splitting thrashing parts which simply shave your head. The technical abilities of all three involved Metalheads are above average *at least what I would say as a fan not being blessed with any musical skills(. But that-s also not a big surprise as they have been around for quite a while in the underground and are an experienced live act. A couple of oversea gigs and support for POSSESSED *when this legend burnt down Bangkok on their Asian tour( should act as referee. @Toxiferous Cyanide@ makes a lot of fun to listen to and to bang your head to till death. So if you have a soft spot for intense and violent Thrash Metal that doesn-t miss excellent playing ability and class then you should not hesitate to check out killer tracks like the opener -Here-s The Knife-, -Bullet Face- or -Stigmata-. I am sure you won-t regret it.

Pyramids/horseback
A Throne Without King (+7")

Midnight Messiah
The Root Of All Evil

Revenge
Metal Is Addiction And Obsession