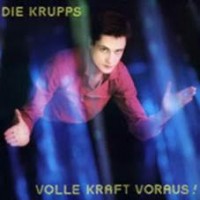 Die Krupps- second album, released in 1982, is one of those long/lost gems which, had the band not become industrial/metal gods, would probably be better known worldwide as a proto/EBM masterpiece. That the record includes both @Wahre Arbeit, wahrer Lohn@ and @Goldfinger@ is enough proof of its stake as a precursor to the sounds of bands like Nitzer Ebb, who-s demo came out the year after, but with such a wide/ranging experimental, industrial, and heavy metal history, it-s easy to forget just exactly how deep Die Krupps- roots go. Despite its iconic and influential status, Volle Kraft Voraus has never been reissued on vinyl since its first pressing by Warner in 1982