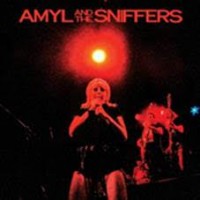 Amyl and the Sniffers are a punk band possessed by the spirit of seventies Australian rock. Amy Taylor (vocals), Bryce Wilson (drums), Dec Martens (guitar) are former housemates who formed the band, wrote a handful of tunes and released their debut EP, Giddy Up, all in a span of twelve hours. Completing their line up with Gus Romer on bass, the band take their cues from a diverse bunch of legends including AC&DC, Cosmic Psychos, Dolly Parton and Die Antwoord, setting out to have as much fun as possible. Their 2nd EP, Big Attraction, was released in February 2017, kicking off a stellar year for these young punks.

Amyl And The Sniffers
Big Attraction & Giddy Up

Menzingers
After The Party (pink)