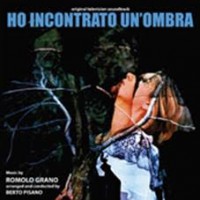 Digitmovies is pleased to release the rare LP from the world of 1970s Italian cult TV. "I Have Met a Shadow" *original title> "Ho incontrato un'ombra"( was broadcast by RAI Television in Italy in 1974. The success of this screenplay was also due to the OST written by Romolo Grano. The main theme @A Blue Shadow@ became a record and radio hit thanks to composer Berto Pisano's evocative orchestral arrangement which was released on the EP single *along with @Tema di Silvia@( *Ricordi SRL 10707(. The leitmotif was also included on an LP under the same label *also containing other songs not related to the background music of this TV series(. The true OST of "I have met a shadow@ *@Ho Incontrato un'ombra"( only came out on a promotional album under RCA's label Pegaso, with Grano's music beautifully arranged and conducted by Berto Pisano. Fortunately we managed to recover the stereo master in excellent condition which had been assembled in the 70s for the limited edition audio vinyl. It's one of the rarest recordings on the collector's market. The master tape includes virtually everything that had been recorded for the TV series and which was re/edited in different scenes.The sad and romantic main theme with a hint of mystery is introduced in Tr.1 / side A, and is reprised in a nostalgic guitar piece in Tr.5 / side A and again in Tr.4 / side B with electronic harpsichord. This beautiful main theme is alternated with danceable lounge music *Tr.2, Tr.4 / side A e Tr.2 / side B( and suspense *Tr.3 / side A e Tr.3 / side B(, as well as with the sad and sensual @Tema di Silvia@ for sax and orchestra *Tr.1 / side B(. The recording session featured two extraordinarily gifted soloists> Oscar Valdambrini on trumpet and Edda Dell-Orso with her incredibly beautiful voice, an orchestral instrument in all respects. Limited edition of 250 copies.