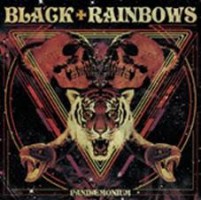 BLACK RAINBOWS are back two years from their last album, Stellar Prophecy, with a magnificent new full/length comprised of nine tracks for about 45 minutes of music. The record has this mix of new wave of stoner/occult riffing a la Black Sabbath, but in a heavier way. Some of the songs remind of Fu Manchu but sound heavier than ever, and then you have one long doom/sludge/stoner suite *@Grindstone@(, and a couple of lysergic, dreamy, heavy psych songs that will blow your mind. The album sounds killer and was recorded at Forward Studios, one of Italy-s finest recording spaces. Produced by Gabriele Fiori and engineered by Fabio Sforza, with a special focus on the drums, handled for the first time in Black Rainbows by Filippo Ragazzoni. Bass riffing is solid and has a mellow sound, and the wall of fuzz from Fiori's guitars will drive you nuts! Artwork will be, for the third time for the band, from the visionary SoloMacello. This is the sixth studio album for the band, and by far the best one yet. It-s the most solid and complete album they have ever recorded.

Black Rainbows
Twilight In The Desert

Planks
The Drakest Of Grays