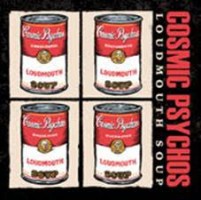 The Psychos are back, mate! Australia's most legit export since Crocodile Dundee have announced the release of their eleventh studio album, -Loudmouth Soup- . They've also got a ripper new vid for your eyes to devour in the form ofeeling Average'. And frankly, after singing about beers for more than solid three decades, it's no surprise that the Psychos have finally delivered a song about the hangover from hell. You can get a glimpse of this tribute to the big spit below.Having sent their previous record labels broke, the -Psychos will release Loudmouth Soup on April 13th . The LP was recorded last year on singer Ross Knight's storied farm, Spring Plains, and produced by longtime collaborator Silvia Vermeulen. Flown into to the rugged fields of Eastern Victoria especially for the gig, Vermeulen has been the Psycho's trusted live engineer in Europe for longer than they can remember.Testament to their status as seasoned road dogs, the Psychos will hit the road shortly after album release, taking in just about every damn venue that can provide a cold brew and corner to play in.

Tommy And The Commies
Here Come