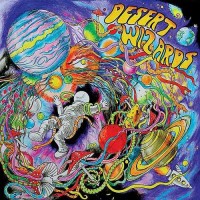 Desert Wizards
Beyond The Gates Of Cosmic

Desert Wizards was formed in 2007 by four music/loving friends from Ravenna, who despite of having in common the love for the typical sound of psychedelic and hard rock music of the 70ies, have never had the occasion to work together. Thanks to its success in Ravenna's underground scene, Desert Wizards released several records in the early part of this and and began touring and gaining recognition worldwide. In this band, where the most hard parts are in a decisive Black Sabbath style, they still leave space for relaxation and Floyd/like and Doors/like atmospheres. The band has started to experience more and more vintage sounds, introducing the synth to their musical repertoire, allowing a vast range of effects to the modulation of sound and a long composing work starts, the pieces that have been extracted are the result of exhausting arrangement and researches of sound to an extent that the band does not want to allow compromises. And thus, the recordings end and "Beyond the gates of the cosmic kingdom" is released, the last, longest and meticulous labour of the band.

Big/brave
A Gaze Among Them