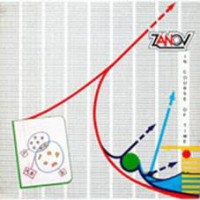 Under the alias of Zanov we find the works of French electronic pioneer Pierre Salkazanov, who had started playing guitar in the 1960s in a Shadows styled band, Les Ambassadors. Instrumental rock was not enough for Salkazanov, he was always looking for evolution, so when a meeting with French synth player Serge Ramses *of @Secret@ fame( got him into the world of synthesizers he just dived deep into the bourgeoning world of electronic music. He got himself a VCS3 and started producing works into a 4/track Teac tape machine. French music was at its best, it was the time of Jean Michel Jarre, Didier Bocquet, Richard Pinhas and Heldon, Alain Meunier... Even Gong-s Tim Blake was living in France at that time. And so Zanov soon caught the attention of Polydor, who released his first two LPs Green Ray in 1976 and Moebius 256 301 in 1977. In Course Of Time, his third LP was originally issued in Canada in 1982 and in France in 1983, although it contains works that he had began working in 1979. The material was originally shelved due to legal matters, although he continued to add some changes even after that. The Canadian edition came out in Les Disques Solaris, a recently created label that wanted to specialise in @cosmic@ music. Zanov used the same equipment he had used on Moebius 256 301, albeit this time he gave more use to the RMI Harmonic Synthesizer.Zanov-s three albums met with unanimous critical acclaim for the sound quality as well as for the originality of this very personal universe.Zanov-s third LP was released in 1982 in Canada on Les disques Solaris and in 1983 in France on Ondes.