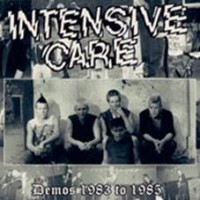 Back in 1980 when all the world was young, Iain Kilgallon started a band with 3 other guys, Tam Stewart, Iain Tannock and Mark Hendren. The boys were all big fans of Punk Rock and wanted to try and do their bit to add to try get their home town of Gourock, situated on the West Coast of Scotland, represented on the UK punk rock map. They decided on the name Side FX and were soon playing support slots, playing mostly original material, to the local host of new wave bands in the area, which had still to produce any out and out punk acts. After around six months of playing live, Mark Hendren announced he wanted out as he wasn't enjoying playing. The guys had a look around for a new guitarist and while in the middle of this, we all decided that we needed a name which better described our brand of basic, angry punk rock. During a night in Iain's parents house drinking Merrydown Cider and Tennents Lager, and after listening to the new compilation i! The Album', the guys decided on Intensive Care.