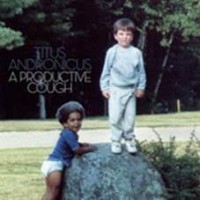 Since debuting in 2008, Titus Andronicus hereafter ] has been conditioning faithful listeners to expect only the unexpected. With A Productive Cough, ] has executed the most shocking departure yet/but only if, as ever mercurial singer/songwriter Patrick Stickles insists, @you haven-t been paying attention.@ In a move that may infuriate the black/denim/and/PBR set, A Productive Cough sets aside leadfooted punk anthems in favor of a subtler, more spacious approach that pushes Stickles- soul/baring songwriting to the fore, creating an intimacy between artist and audience with which previous ] efforts had only flirted. @] records have always had their fair share of ballads,@ Stickles explains, @but they were always buried amidst a lot of screaming. Now, they are the cornerstones. Punk rock is nice, but it is but one tool in the toolbox from which I pull to achieve my artistic purpose, and that purpose has always been communication and validation. This time, perhaps I can more effectively talk to the people if I am not so busy yelling at them.@ The mission of A Productive Cough is apparent from the first bars of opening track @Number One *In New York(.@ As a tableau of piano and dulcet horns unfolds, Stickles unleashes a breathless and unceasing 64/bar verse with subject matter as sprawling as the kitchen/sink arrangement, which grows to include sparkling guitars, twinkling bells, and uplifting choral vocals as Stickles searches desperately for the strength to carry on through an increasingly violent and frightening world. A Productive Cough was recorded by longtime ] producer Kevin McMahon at Marcata Recording in New Paltz, NY, with a cast of 21 elite musicians whose diverse skill sets allow ] to incorporate far/reaching musical styles. Even amongst veteran pianist Rick Steph *Cat Power, Lucero, Hank Williams Jr.( and esteemed cellist Jane Scarpantoni *R.E.M., Bob Mould, Lou Reed(, listeners may be most struck by lead vocals from Brooklyn singer Megg Farrell for the aging/punk-s lament @Crass Tattoo,@ as the perennially raspy Stickles humbly steps away from the microphone to enable what may be ]-s most unapologetically gorgeous track yet. @The last record The Most Lamentable Tragedy was very much a culmination of all that had come before/closing, or really slamming, a lot of doors,@ Stickles explains, @and to move forward, I had to look for a new door to walk through, only to find a window which had been cracked open all along. A Productive Cough is the gentle breeze which had been wafting through, which I can breathe in fully at last.@