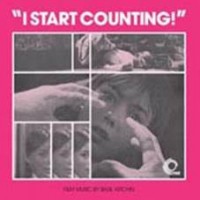 Released for the first time here is this charming, odd and affecting score by Basil Kirchin, made "in association" with his regular cohorts, Jack Nathan and John A. Coleman. The film, released in 1970, was directed by the multi/talented and quite radical David Greene. Greene was also an actor, a successful producer and had already employed the services of Kirchin for his 1967 horror The Shuttered Room and quirky crime thriller The Strange Affair. allowed Kirchin to explore more dark edges of film music and composition> as a score it bubbles along with lots of classic Kirchin hallmarks, but here we are also treated to a beguiling opening song that is lyrically and musically developed and then slowly pulled apart over sequential cues. We also have a unusual Eastern tinge to some of the percussion and Kirchin's distinctive pastoral oddness is here too. His sonic jumps between low drama and high tension are extraordinary, and his use of free jazz to bring about unease is both perfectly simple and effective. I remember talking to Basil about the opening song many years ago and he explained that his original idea was to have it sung by Cilla Black or Jenny Agutter but in the end Lindsay Moore, the daughter of jazz chum Barbara Moore stepped in.