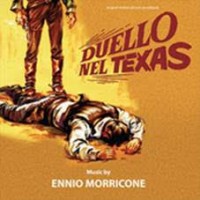 Digitmovies, with collaboration of Gruppo Sugar, issues for the very first time on CD, in the de/luxe digipack series, the complete OST in mono by Ennio Morricone for the western movie "Duello nel Texas" (aka "Gunfight at the red sands") directed in 1963 by Ricardo Blasco and starring Richard Harrison, Giacomo Rossi Stuart, Mikaela. The village of Carteville on the border to Mexico is in danger from a mysterious and dangerous gang of thugs. One night the band assaults the house of a Mexican family, including an orphan of American nationality adopted by Don Diego and known by all as "El Gringo". The gang kills the householder and steals the gold the family has at home. The man eventually discovers the true identity of the criminals. One against all, "El Gringo" succeeds with cunning and courage in liberating the town from the presence of evildoers forever. For this film Ennio Morricone has signed his first western score ever, just one year before the global success of "Per un pugno di dollari" *aka "A Fistful of Dollars"( by Sergio Leone. Although still far from his musical style which is internationally known for this kind of genre, the then 35 years old Ennio Morricone has composed a strong symphonic score featuring the main theme song "A Gringo Like Me" *we hear both the performance of Peter Tevis and the alternate one of Dicky Jones( which gets reprised with exciting instrumental versions, alternated with saloon music, highly dramatic orchestral passages full of tension, music for wild rides, romantic and epic sequences. Till today only the song performed by the voice of Peter Tevis and a suite of 4>53 issued on a C.A.M. compilation were avaialble on the soundtrack market. For our CD *TT 41>54( we have used every note which had been recorded during the original session. This project has been fully approved by M° Morricone who with his great friendship helped us in the making of a release which is much awaited from all his fans around the world. Limited edition.