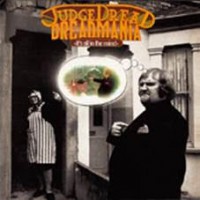 Judge Dread
Dreadmania (it's All In The Mind)

Dreadmania *It-s All In The Mind( is Judge Dread-s *nee Alexander Hughes( very first album, originally released by Trojan Records in 1972, and is a confirmed Ska and Skinhead Reggae classic. The least likely of reggae stars, the white, Brixton raised Dread had previously served as a club bouncer *where he met Derrick Morgan and Prince Buster(, wrestler, bodyguard, DJ, and debt collector for Trojan Records, before hitting it big in 1972 with @Big Six@ / inspired by Prince Buster-s classic @Big 5@ / which reached number 11 on the UK chart and sold nearly a half a million copies. On the back of that hit, and its follow up @Big Seven@, the label quickly assembled an album to cash in on their success, and its title, Dreadmania, aptly summed up the state of the nation, as Judge Dread fever gripped the island. Of course, the two hits were included within, as was @Oh She Is a Big Girl Now,@ which was subsequently spun off as a single, and @Dr. Kitch,@ which later reappeared as a B/side. Appropriately enough, the Chuck Berry hit @Ding a Ling@ was covered, and just in case there were any remaining doubts about the album-s contents, there-s even a track titled @Donkey Dick.@ @It-s all in the mind&It-s all in the mind&The rudeness it-s all in the mind,@ the Judge ruled on the opening track. Perhaps, but Dread could make even a nun blush. He was the king of the double entendre, his clever wordplay and wit a revelation for the staid British. But he also captured the imagination of Jamaicans. Dread wrapped his rude lyrics within perfect reggae backdrops, with many of his songs built around classic Jamaican rhythms, adding further authenticity to his sound.