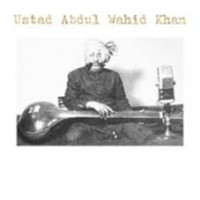 Even though the original recordings are crackly and in low fidelity *but also deeply charming( it seemed necessary to repress this record for its immense historiographic value. Here these recordings are made available with new mastering, in as clear fidelity as possible.Fans of Indian Classical Music will no doubt know the name Ustad Abdul Wahid Khan. He founded the Kirana gharana musical family with his cousin Abdul Karim Khan in late 19th century, which was one of the most prolific and revered gharanas in Hindustani classical music. In addition, serious American minimalist scholars and fans have also been heard echoing his name, linked to that of Pandit Prân Nath, his student for over twenty years. It was Abdul Waheed Khan who pushed his pupil Prân Nath into exporting the techniques of their music school, which brought Prân Nath to the US where he drastically influenced most of the then/emerging avant/garde New York scene. Terry Riley, La Monte Young, Rhys Chatham, Jon Hassell, Yoshi Wada, Marian Zazeela, Henry Flynt, Charlemagne Palestine and more were Prân Nath's students and in some cases close collaborators. It is therefore clear how important it is to gain deeper understanding of the music ofUstad Abdul Waheed Khan. A celebrated singer and sarangi player, Khan forbade recording of any of his performances to avoid imitation by other singers. Only these 3 pieces survived, recorded in secret for a radio broadcast in 1947, just 2 years before the singer-s death. A truly stunning document that is essential to understanding the modern era of Hindustani classical music, whose influential reach is immeasurable. Limited edition of 500 copies.

Rigai, Amiram / Manolis Kalomiri
Piano Music Of The Near East