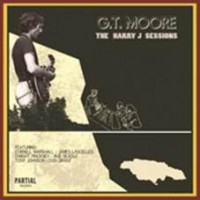 ] In 1980 Gerald Moore / of G.T. Moore and the Reggae Guitars and Heron fame / was in Kingston, Jamaica working with Lee Perry on the [Return of Pipecock Jackxon' LP. Gerald went into Harry J's studio with James Lascelles *Global Village Trucking Company, The Breakfast Band( and Bud Beadle *Ginger Baker ^ Salt( alongside members of Zap Pow> Don Grant, Cornell Marshall and Dwight Pinkney.] Of the four tracks recorded *two vocal and two instrumental( only [Utopia' was ever released *on the Black Star Liner label in 1980 and then reissued by Partial in 2014(.] The tapes sat around gathering dust for the best part of 40 years and are now finally unearthed. ] Mixed directly from the masters by Dougie Wardrop are [Jerusalem', [Working For The Dollar' and [Constant Spring'. Also [Utopia' gets a fresh mix.

Holt, John
Before The Next Tear Drop